There is difference between dance and choreography. Dance is autonomous and choreography requires selection and composition. Could you tell us more about your attitude about those 2 things? What is your focus recently?
— Gun: My focus is space, time and form, the overall structure of the work. I think that is important, connecting the movements to an artistic form. “Dance is form” that is a famous declaration of one of the big forerunners in Swedish Dance, Birgit Åkesson (Birgit Cullberg is perhaps more known, but she is narrative in her choreography). I use improvisation during rehearsals, giving tasks to my dancers to solve, they are part of the process but in the end I
decide what to use, the selection and composition.
— Olof: My consideration is about the body and its relation to society, how we relate to it, how it is shaped how we move in life. I´m from the first rave generation, my connection to music is important. I´m also a visual artist and I´m creating new spaces new backgrounds for the dance. Many of my works can be seen as art installations as well. I´m relating to both worlds – dance and the visual arts – these works are developed in concious process, of course
impro is part of it but in the final end they are composed.

You both are working many years in the field of performing arts, doing your original works  and sometimes with collaboration with other media/ artists. What do you think about development of dance and his future? Who’s work you can mention you admire most or they have been influenced your work?
— Olof: I´m often working in a team, not only with dancers being active, I do projects bringing dancers into collaborations with composers, fashion designers, filmmakers etc aside from the visual art I´m creating myself. I have even done projects with cartoonists sharing space and experiences. I have opened a multidisciplinary studio. Dance will have to move across borders but keep up it´s own identity.
— Gun: As a contemporary choreographer I find a lot of inspiration in the Visual Arts, in Architecture since I am very intresseted in space, spatal ideas and time. My work is also influenced by philosophy and science, I share life with a sceintist, a medical doctor and we create great works together. I think I´m often looking towards the visual artists or architechs for inspiration, Robert Smithson, Richard Long, Tadao Ando but if you mean choreographers
my generation of course experienced the work of Pina Bausch, but also L´Esquisse physicality in France, Carolin Carlsson or Keersmakers form and musicality, Margareta Åsberg in Sweden. That doesen´t mean that I do works in their technique or tradition, just that they have made me move forward towards my own personal expression. The physical aspect of the body will be important also in the future, movements, basic and trained skills will have a future.

Many people pretend to have autonomy and authorship but they just make another version of what has been done before. Or they pretentiously name it Conceptual dance/art. Do you have any insights?
— Gun: I´m not to fond of conceptual art, as I´ve experienced it: speaking instead of moving, they have the right to do whatever they like, but it is not something unique and new. Remember, everything has been done before, but the time, the audiences are new. Memory in Dance and dance history is very short, you always want to be unique, the first … But be humble, give credit to those who treaded the paths before you, those who took the risks, tried things that were not trendy. “A good artist I just a lucky guy” said the artist Marcel Duchamp a hundred years ago. You might be in the right place, doing the right thing for the moment… So don´t run for the trends, be consistent, and don´t stop working.
— Olof: As an artist I see many performers using my ideas or technological inventions, I´m glad they are inspired but if they would “quote” me and my work, I wouldn´t mind.

You have your own space and program and produce different works of artists. What is your opinion of the new generation?
— Gun: In Sweden they have been fortunate to have an infrastructure, educations etc built by their forerunners. Now they are lost, expecting a lot, it is not easy for them – “Who will buy and present my work? Sorry, you have to do the work yourself!” It is the truth, five years after a dance education just 5-10% are still in business. You must have something really special to continue. When we are programming we offer evening programs for new choreographers, giving them a platform… they should have the possibility to meet the audience, the funders, the critics. But we say that we are interested in the survivors, those who didn´t give up for the hardships in this business. They have something to tell!
— Olof: We are paying back in a way, we have managed to build a structure for dance, and visual arts “The 3rd Floor”. It is a Dance & Art space for dance, exhibitions, performance art, concerts etc. There is a studio space for rehearsals. It is also a space for exchange of ideas, discussions and inspiration across the traditional borders in the arts. We have a Dance Library. It is an artist run space, an artist initiative. New generations must take the same
responsibility for others, for the artform in the future, not only forwarding their own career.

Hang out technique is named from the late 90’s from Swedish dance institute. Do you think the idea of being cool, careless and hanging out on stage has faded out of popularity already? Do we have new trends in the field of dance?
— Gun: For me the conceptual trend and the coolness lacks some respect for the audience. Trends are coming and passing, if you keep to your ideas, if you are consistent, you will be in phase with the trends at some point… I have been in and out of the public taste several times during my career, but I still continue. Just believe in what you are doing, don´t be so anxious …
— Olof: I see some people today trying to ride on old traditions that they obviously not are a part of. They say they are doing rave, but don´t have any real connection… it´s a kind of everything goes. Future will show that they are not really grounded in the history or technique they want to relate to. Every generation has to try and in a way make a friction to older generations (I´m regarded as old though I´m just in the forties!)

Can you tell us more how you make your own decisions, when it comes to use props and decor?
— Gun: Often, light is the only necessary prop for a performance. That is special for dance, especially if you are presenting something abstract. For me a prop must have a central role in the piece, I often regard the space as the most important partner. I am looking for the ultimate space for my choreographique ideas. Sometimes it leads me to an ordinary theatre space, sometimes to another world, an abandoned hangar, an old factory or the rocks by the sea… I have used props, they must be important from a visual, tactile or spatial view. Through the years I have used, large parabolas, to change the movements, real large heavy stones to change the movement patterns, glass to divide the space, large scale costumes to change the movements of the dancers …
— Olof: I usually have an idea about the space, and the scenography, which plays an important role in my works. Now I´ve been working with switched glasswalls to change the perspective, the visibility of the audience. They are closely related to the whole concept – the dance and scenography is one body in my works.

You are coming to present your 3 projects in Sofia for the 4rd edition of the festival “Etud and friends” in June 2019”. Tell us more what we have to expect from these performances? DIGITAL FOOTPRINTS is an interactive high-tech game with three dancers, and probably with the audience. Tell us more about how the idea comes to you?
— Gun: I like to change and question the perspective of the audience. We take things for granted, can we trust our senses? Digital footprints is inspired by the traces we leave, on the floor, on the earth, in cyberspace. Today we even leave electronic footprints … I wanted to take control over this process, giving the power to the dancers to change the images, the sound or light by their shear movements. Together witn Åke Parmerud, a composer, we have developed a system that detects directions and speed of the movements. So the dancers can form their traces, by their skills. In an earlier work I let the audience initiate the movements by a radiocontrol system with vibrotactile communication. I hope to invite the audience more implicit in later versions, as a spatial installation with and without dancers, I think these ideas I share with Olof.

Off the Wall series is the installation, which turns into a performance set with a trio of dancers. Here probably you give your voice and philosophy of your relation to dance as an art form. Give us more feedback about it?
— Olof: The origin for the whole series of “Off the Wall” was a dream from my childhood, the feeling of being a part of something, but at the same time not, there is something inbetween that keeps you away from the world. With the switched glass I found the right set reflecting the tune for the piece. It is a kind an installation with the audience around, they can see the dancers and themselves though and mirrored by the glass. The programmed glasswall changes transparency in relation to the music and a decided pattern and the audience sometimes can see though the glass, sometimes the dancers get blurry or disappear. The three dancers are individuals but working with the same movement material. This work relates to an ongoing discussion of the borders between public and privacy. 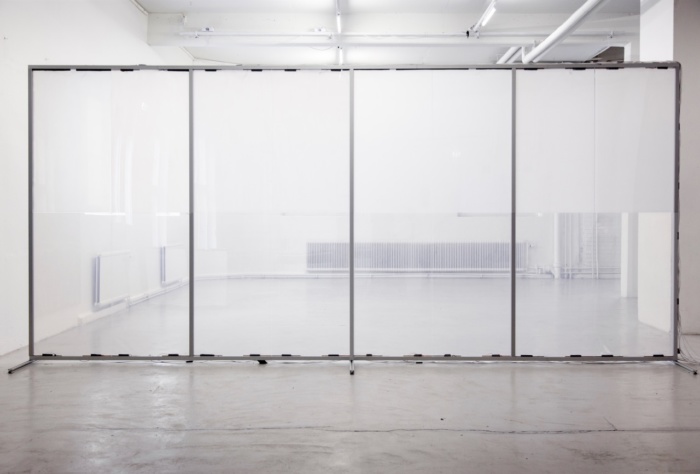 “See You Somewhere” is inspired by the rave generation. Tell us more about your relation/relevance and effect to this generation?
— Olof: In my teenage years I loved to go to rave parties in old industrial buildings or in the woods. I felt a freedom, the dance itself was the drug. I have tried to keep this feeling alive in my works, some of them really ends in a “rave situation” inviting the audience. I guess my minimalastic approach is also part of my experience, repetition, simple moves that can go on for hours, dance is enough in itself. This solo is more of a sketch for a larger piece, using minimalistic and repeated movements, just like in a rave, but I will put them in a new context, new spaces not necessary connected to the original setting.

Gun Lund and Olof Persson are coming to present their 3 projects in Sofia for the 4rd edition of the festival “Etud and friends” in June 2019.

Festival “Etud and friends” is supported by the Culture Program of Sofia Municipality for 2018 and Foundation Etud.
In partnership with DNK- Space for contemporary dance and performance and gallery Etud